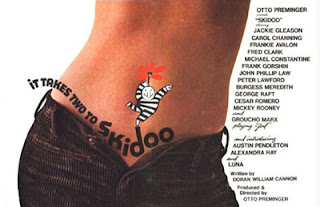 I have been invited by Todd Mason of the Sweet Freedom blog to participate in this weekly blog ring celebrating films and television that have been unjustly forgotten or in some cases rightly buried. Special thanks to him. Visit his blog here for a full list of participating blogs.

Ah, Hollywood in the late 1960s. Like everything else in the country at that time the movie industry was in a state of flux. Costs were up and attendance was down. Stars and directors were in danger of losing their relevance.  In desperation, the studios turned to the one demographic they hadn't already exploited to death: the youth market.  The decision of these studio executives to exploit the freedom suddenly afforded to them by the disbanding of the Hayes Code as well as make movies targeted to a segment of the audience that most of them knew nothing about resulted in some of the most fascinating cinematic train wrecks in film history.

Which brings us to Otto Preminger's SKIDOO (1968). It must have looked great, or at least profitable, on paper. You've got established stars like Jackie Gleason, Carol Channing, Groucho Marx and Mickey Rooney for the grownups.  Frankie Avalon was there for the kids and Preminger even got his BATMAN co-villains Burgess Meredith, Cesar Romero and Frank Gorshin to show up in cameos. Add a healthy dose of hippie and drug humor to make it topical and you've got a sure-fire recipe for success, right? Well, not really. It's clear that Paramount had absolutely no clue how to sell the resulting fiasco, as can be seen from the trailer hosted by none other than Dr Timothy Leary.

Jackie Gleason is Tony Banks, a retired mob enforcer living the suburban good life with his annoying wife Channing and their hippie loving daughter, played by Alexandra Hay.  However, just when Tony thought he was out he gets pulled back in when he's recruited by mob boss Groucho Marx (playing a character named God) to kill his old pal Mickey Rooney, who's currently in jail and planning to turn state's evidence. Tony gets himself sent to the slammer where he bunks with draft dodger and occasional chemist, Fred (Austin Pendleton). When Tony borrows some of Fred's stationary to write a letter to his family he finds that the envelopes have been laced with LSD. Tony's trip turns him into a peacenik so he plans a prison break which involves dosing the entire prison with acid and escaping via hot air balloon. Soon Tony and his daughter's hippie friends, led by John Phillip Law (looking very Manson-esque) are en route to God's yacht for the "hilarious" finale. By the time Carol Channing shows up doing an impersonation of George Washington crossing the Delaware while singing the film's horrible theme song you'll either be praying for death or mildly amused by the sheer audacity of it all. 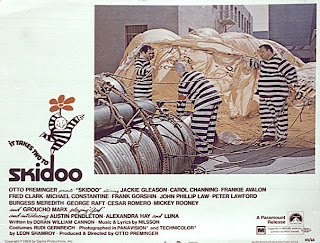 Truth be told, it's not all bad.  There's a certain amount of entertainment to be had by watching some of the most idiotic acid trip sequences ever committed to film (Gleason hallucinates being attacked by giant metal screws with Groucho's head attached to them). Some of the Harry Nilsson songs peppered throughout the movie are kind of catchy and Nilsson has a goofy cameo as a tripping prison guard. The movie's rarely boring and for fans of cinematic misfires it's certainly an interesting watch. It's no surprise that just about everyone involved with this film would like to see it buried but honestly, most of them have probably done worse. I'll sign off with the most interesting part of the movie, the end credits, which are completely sung.
Posted by Chuck Esola at 12:26 AM