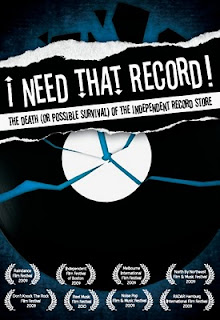 For more overlooked films go here.
Anyone who has browsed the shelves of a big box retailer such as Best Buy in the past few years will surely have noticed that the shelf space devoted to music and video media has drastically shrunk. In addition, the selection of titles being offered for in-store purchase has also dwindled. When this is taken into account along with the disappearance of local "mom and pop" stores it creates a cause for concern for those who want to be offered something other than the latest releases from the major labels. I NEED THAT RECORD! is a documentary that examines the reasons why local retailers have vanished and how the closing of these stores have created a void in the lives of collectors and possibly the culture itself.
The film begins with a history of the record industry, including the payola scandals of the 1950s and the rise of formatted radio. It then looks at the emergence of corporations like Clear Channel, with their rigidly enforced playlists and emphasis on advertising dollars over music. The film then turns to its true subject, the independent record store, run by fans and seen as a place where like-minded collectors could gather, meet and turn each other on to music to music they wouldn't ordinarily be exposed to. Store owners and customers are interviewed, each explaining how these stores have created a sense of community among their customers. Unfortunately, by the mid to late 1990s many of these stores had begun to close their doors. The film examines several reasons for this including the buying power of the big box stores, who were willing to sell music at a loss in order to increase store traffic, and especially the rise of Internet file sharing, which caused an industry wide slide in record sales that continues to this day. The film also looks at the greed of the major labels, who continue to try to charge almost $20 for a product that costs less than a dollar to produce, as well as the rise of Internet stores like Amazon, which is able to sell music at a much lower price point than the indie stores. 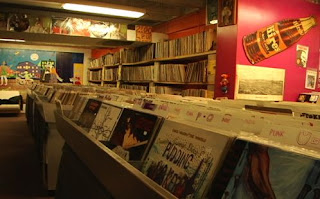 While the film doesn't make many points that haven't been made elsewhere regarding why people are shunning the record industry, it does make a convincing case regarding the loss of a place for fans to gather and socialize. While much of this socialization has moved to online bulletin boards, it's not the same as being able to meet people face to face. Likewise, while just about every album is readily available on Amazon, the thrill of the hunt is gone. A large part of the fun of collecting is sifting through countless bins full of junk, looking for buried treasure. That's one experience that the Internet just can't replicate.
Posted by Chuck Esola at 12:02 AM