One of the most popular tropes of 1970s action cinema was the fear of  leaving home and venturing into some of the more rural parts of the United States. It seemed that there was trouble just waiting to happen in every part of the country that wasn't lucky enough to be covered in concrete. In DELIVERANCE (1972) the vacationers no sooner get to their destination when they meet up with homicidal inbred hillbillies. In TEXAS CHAINSAW MASSACRE (1974) it's homicidal inbred cannibal hillbillies. Jack Starrett's RACE WITH THE DEVIL tries to go them one better: The naive city folk leave town and are pursued by homicidal Satanists. They'll not only take your life but they'll have your soul, too! Best friends and business partners Roger and Frank (Peter Fonda and Warren Oates) pack into a giant RV with their wives Kelly and Alice (Lara Parker and Loretta Swit) en route to a skiing vacation in Aspen. Of course to get there they need to travel through rural Texas.  As always happens in this type of film, things go south as soon as they turn off the main road in favor of a shortcut.  It's a shortcut, all right....a shortcut to Hell! While parked for the night, Roger and Frank witness a Satanic ritual a short distance away which culminates in a human sacrifice. When they realize that they've been seen, the cultists give chase to the the vacationers in order to silence them.

As is also typical of this genre, the film tries to ratchet up the paranoia level by having everyone the innocent outsiders meet be part of the Satanic conspiracy. As a result everyone in a several hundred mile stretch of rural Texas is tied into a vast Satanic network. Yeah, okay, I can buy that. What I can't quite accept is that the cultists didn't see a huge RV parked right next to their ritual site. I guess chronic myopia is a side effect of selling your soul to Satan. Anyway, the film does a decent enough job of giving the impression that someone is always looking over our heroe's shoulders. Fonda does a surprisingly good job of playing someone who's involved with something that's out of his depth (in a Dustin Hoffman in STRAW DOGS kind of way, except it's still Peter Fonda so lower your expectations a bit) but Warren Oates simply could not portray a wimpy outsider if his life depended on it. That's not a criticism. Oates is always a delight to watch but I still think that if he wanted he could have sent those pesky cultists straight to hell with a flick of his wrist. 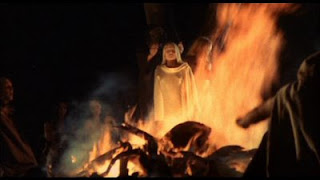 RACE WITH THE DEVIL is an entertaining film but kind of a slow burn, with not a lot happening in the first half of the film. However, the second half is loaded with some amazing stunt work, the likes of which would probably all be done with CGI today.  One of the things I really love about movies from this era is trying to figure out how the various gags were achieved in a pre-CGI world.  This film was a staple on TV in the late '70s and early '80s and it's perfect fare for a lazy Sunday afternoon. And the best part is that you can watch it while you're safe at home.