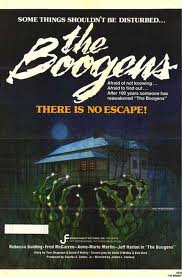 A cable mainstay in the early 1980s, James Conway's THE BOOGENS left a favorable impression on horror fans of a certain age who were lucky enough to stumble across it while channel surfing. Then, just as suddenly as it appeared, the film became very tough to see, vanishing until its belated VHS release in the dying days of that format. Since a large part of the film takes place underground, that that transfer was dark and details were often hard to make out. Luckily, the film has now been reissued on Blu-ray, giving audiences the chance to see THE BOOGENS the way it was meant to be seen for the first time since 1981. 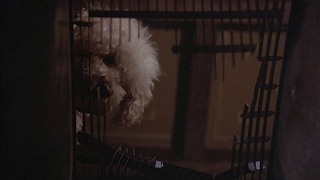 There's not much to the plot. Mark and Roger (Fred McCarren and Jeff Harlan) are hired to help reopen the local mine in snowy Silver City, Colorado, the site of a tragic accident that has kept the mine in disuse for sixty years. Joined by their girlfriends (Anne-Marie Martin and Rebecca Balding) and toy poodle (who's probably brighter than all four put together), everything goes swimmingly until the miners awaken the boogens, a race of subterranean critters with fangs and tentacles who are not too pleased by having their sleeping place disturbed. They use the mine's tunnels (which conveniently connect to the neighboring town) to start bumping off the human population, thereby making Silver City safe for boogens once again. 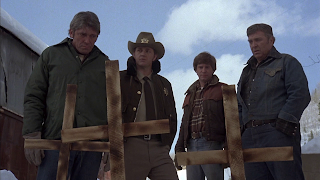 The best thing about THE BOOGENS is its complete lack of pretension. Obviously made on a shoestring budget (the entire cast consists of only ten people), it never tries to be anything but an old fashioned creature feature. Conway wisely keeps the boogens hidden for most of the film but when we finally do see them, they're obviously hand puppets.This is one of the few films whose pleasures derive almost entirely of knowing exactly what is going to happen next. After all, THE BOOGENS wasn't even the first horror film from 1981 to revolve around a mining accident - that honor goes to MY BLOODY VALENTINE. It's a credit to the film that it never seems boring as it hits the obligatory tropes, ranging from the old timer who leaves cryptic messages about the menace to the film's fiery finale. Where the film does manage to depart from most of the horror films made at that time is in the depiction of its characters. In most films of this type the characters exist basically as target practice for the monster. While they serve the same basic purpose here, at least some attempt is made to create likeable characters that the audience will actually miss once they get killed. 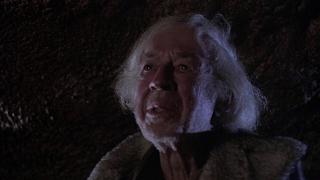 THE BOOGENS  was shot in Park City, Utah, the future home of the Sundance Film Festival. I have to hope that some local entrepreneur is giving BOOGENS location tours to jaded cinefiles, reminding them of the pleasures of a familiar story well told. It may not change your life (in fact it's pretty much guaranteed not to) but I can't imagine anyone with any affection towards horror films not having fun with THE BOOGENS.