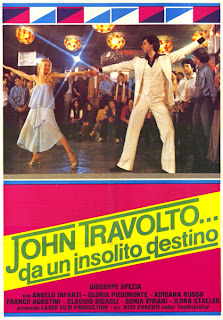 Last weekend, while attending Exhumed Films' (hopefully) first annual eX-Fest exploitation film marathon, I was exposed to this little mindbender of a film that I had no idea even existed. The folks at Exhumed referred to it as Travoltaploitation and indeed that seems to be an accurate representation of its genre. While it's a comedy, there's little, if anything, in it that's intentionally funny. There's lots of music but it's not a musical and the romance in the film is dealt with so quickly as to seem like an afterthought. Yes, this is a movie that got made simply because its star just happens to bear an uncanny resemblance to a certain 1970s film icon. 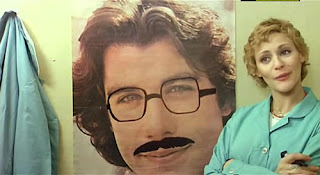 The story, such as it is, revolves around Johnny, a nebbishy cook in a luxury Italian hotel who spends his spare time at the local disco (subtly named John's Fever) drinking oversized glasses of wine and staring from afar at the club's lovely DJ, Illona (Ilona Staller, aka future porn star and politician Cicciolina). His disco-obsessed friends want Johnny to stop being such a downer and introduce himself to Ilona but his shyness and complete inadequacy on the dancefloor  put a stop to this. At about the film's thirty minute mark Johnny's friends discover what the audience realized after about thirty seconds: that if Johnny shaved his moustache and took off his glasses he'd be a dead ringer for John Travolta. They give Johnny a makeover, buy him a white leisure suit and concoct a story about how Johnny doesn't actually sound like Travolta due to a case of laryngtis (although the actor who performs in the film's English dub does sound quite a bit like him). Soon Johnny is not only strutting his way around John's Fever (complete with faux Bee-Gees music on the soundtrack), but his channeling of the Power of Travolta gives him the confidence to become a disco fiend, thereby allowing him to win if not the heart at least the attention of Ilona. 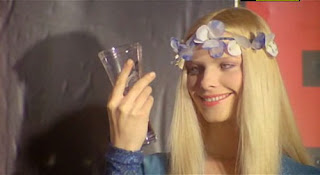 As I mentioned to a friend during the screening this is a movie that plays like a feature length Mentos commercial. Characters break into dance for absolutely no reason, play unfunny practical jokes on each other and make stupid faces at the camera. Still, for a one-joke film it has a certain charm. Giuseppe Spezia, in his only film role, certainly looks like a young Travolta even though his performance is a bit wooden. Staller is charming in a relatively small role and the supporting cast tries hard. I wonder if Travolta or his people were aware of this film and if so what their reaction was. While I can't say that this is a good film, it's definitely unique. And while its music and fashions may cause SATURDAY NIGHT FEVER to appear dated today, one only has to look at this film to see an example of its cultural importance. Seeing this film with a large crowd was a lot of fun, certainly more enjoyable than watching it at home on television would be. Many thanks to the great folks at Exhumed Films for resurrecting this cultural artifact and presenting it in the best possible light. 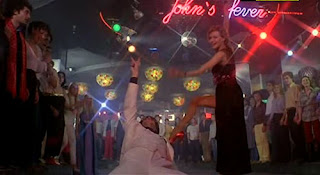 This is the only YouTube clip I could find from the film. It's missing the big reveal at the end but it does give a good idea of what the film is like.
Posted by Chuck Esola at 12:55 AM