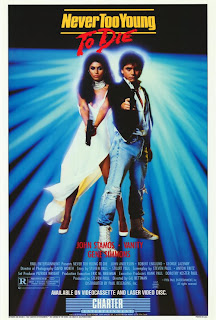 When evil hermaphroditic supervillain Velvet Von Ragnar (Gene Simmons) comes up with a plan to poison the water supply of Southern California he doesn't count on the interference of the one man who can stop him: secret agent extraordinaire Drew Stargrove (a cameo from the Forgotten Bond, George Lazenby). Stargrove steals a floppy disc containing the computer codes needed to put his plan into action and in quickly executed by Ragnar for his trouble. Luckily for the world, Stargrove had the foresight to send the disc to the only other man capable of stopping Ragnar: His son Lance (John Stamos), currently a college student on a gymnastics scholarship who knows nothing of his father's secret life. Lance is soon drawn into the hunt for Ragnar, aided by his college roommate (Peter Kwong), a techno-geek genius who supplies him with the gadgets to get the job done, and Danja Deering (Vanity), Stargrove's former partner who's out to avenge his death.

While Stamos and Vanity attack their roles earnestly and both look suitably pretty on screen, neither is much of a actor. This leaves Gene Simmons to walk away with the movie, which he does effortlessly.  He seems to realize that he doesn't really need to depend on this acting thing to survive so he may as well just have fun with it. Dressed up like a roadshow Dr. Frank N. Furter he overacts shamelessly, thereby infusing the movie with the energy level it needs to remain fun to watch. It's a hoot watching him command his minions (who drive dune buggies and are all dressed like ROAD WARRIOR rejects), visibly chewing the scenery and spitting it out all over John Stamos. 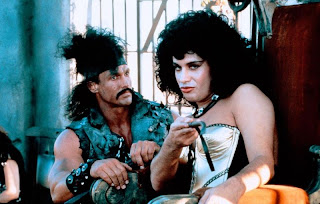 For a change it's actually the script's plot holes that make NEVER TOO YOUNG TO DIE a fun watch and separate it from a hundred over generic '80s action films. When we're first introduced to Lance he's got his own catchy theme song playing over the film's soundtrack even though he hasn't done anything heroic yet (and won't for quite some time). Also, Ragnar states that his plan is to hold the government for ransom so he won't release the deadly toxins in the water supply but he never does this. As soon as he regains control of the computer codes he starts to release the poison. Since Ragnar also lives nearby this might be a bad idea since he never mentions having his own water supply. Likewise, since everyone in the government knows who Ragnar is and that he's behind the plot it couldn't be that hard to find him, especially since he lives in a huge desert compound with hundreds of followers as well as having a job as a singer in a downtown heavy metal bar. 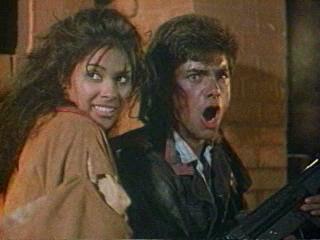 So to sum up: It's stupid, the leads are dull and you could probably write a better script in your sleep. Yet NEVER TOO YOUNG TO DIE remains a fast paced 93 minutes thanks mostly to the go for broke performance by Gene Simmons. This film has never had a DVD release, probably due to the efforts of its stars to keep it buried. Still, if you can find a copy and are in the mood for some silly fun you could do much worse.