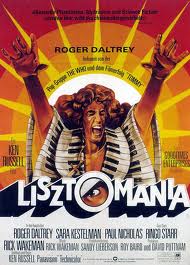 Throughout his long career Ken Russell, who passed away on November 27 at age 84, showed a desire to elicit visceral reactions from his audience through his use of outrageous imagery, whether it be sexual, religious or surreal.  LISZTOMANIA is easily Russell's most visually extravagant film and to this day remains one of his most polarizing for viewers.
Advertised by its studio as the film that "Out Tommys TOMMY," LISZTOMANIA was Russell's followup to that box office hit.  It features TOMMY's very English leading man, The Who's Roger Daltrey, in a biopic of Hungarian composer Franz Liszt. Russell uses Daltrey to reimagine Liszt as the world's first pop star, complete with perm and outfits emblazoned with giant keyboards.  The film follows Liszt's dealings with his various mistresses and groupies, his romance with Princess Carolyn of Russia (Sara Kestelman) and his struggles to create great music.  However, the main focus of the film is Liszt's relationship with Richard Wagner (Paul Nicholas) which begins as a friendly professional rivalry and ends much more seriously when Wagner marries Liszt's daughter and his music begins to be used as propaganda espousing pro-German superiority.

Throughout the film Russell outdoes himself in terms of crazy visuals, most of which are informed by his love of pop culture. For instance, Wagner's nationalism eventually causes him to to transformed into a Nazi uniform wearing Frankenstein's monster, complete with a machine gun guitar. The film's sweetest sequence shows Liszt in domestic bliss with his wife, shown as a parody of THE GOLD RUSH complete with Liszt as the Little Tramp. And I would dearly have loved to be in the room when Russell explained to Warner Brothers executives the rationale behind the scene where Liszt returns from Heaven in a music-powered spaceship in order to defeat the Nazis.

Daltrey has since proven to be a capable enough actor in the right role but he's pretty much out of his element here. Like in TOMMY, he pretty much acts with his hair, tilting his head so it sways in the breeze at a tempo that corresponds to whatever emotion he's supposed to be feeling at the time. At least he's better than Ringo Starr, who cameos as the pope, complete with a eyepatch with a rhinestone cross sewn on it.

Obviously this kind of thing isn't going to be everyone's cup of classical tea. I'm not sure what value, if any, this film has as a biography.  I didn't learn a whole lot about Franz Liszt and I'm even hard pressed to remember any of his music from the film (the score is credited to Rick Wakeman "with assistance from Franz Liszt and Richard Wagner"). In the film defense I'll say that I was never bored and was constantly amused at how Russell constantly managed to top himself with one insane sequence after another. Today's film industry simply won't allow another maverick like Ken Russell an that's really too bad. Like it or loath it, there's never been another film like LISZTOMANIA and there's not likely to be again.