Tuesday's Overlooked Films: Stop Me Before I Kill! (1960) 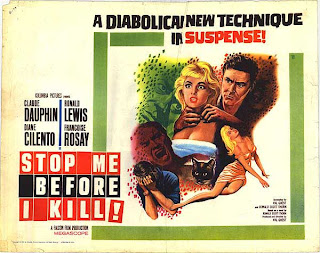 Besides the gothic horror films that made them famous, Hammer Films dabbled in other genres with varying degrees of success including a series of psychological thrillers designed to capitalize on the success of PSYCHO in 1960.  Titles such as SCREAM OF FEAR, PARANOIAC, MANIAC and NIGHTMARE were all designed to exploit the memory of Hitchcock's film. Val Guest's STOP ME BEFORE I KILL!, the first of these films, was released only four months after PSYCHO's premiere in the US so it may be more a beneficiary of good timing rather than a conscious effort to exploit the earlier film.

The film begins with professional race car driver Alan Colby (Ronald Lewis) showing he may want to rethink his chosen profession by barely surviving a head-on collision en route to his honeymoon.  A year later Alan's still not quite over his brush with death so he and his wife Denise (Diane Cilento) decide to take a vacation in the South of France as a means of getting Alan to relax. It turns  out that Alan is afraid to have sex with Denise because of an overwhelming compulsion to strangle her to death afterwards.  Luckily, the couple meet a dedicated, cat-loving psychiatrist, Dr. Prade (Claude Dauphin), who is willing to work with Alan to rid him of his compulsion. All goes well until the morning when Denise disappears amid signs of a struggle and a box full of bloody surgical tools.

PSYCHO worked because Anthony Perkins was able to create audience sympathy for Norman Bates. Unfortunately Ronald Lewis is unable to make Alan Colby, as tortured as he is, into a halfway sympathetic character. As written, not only is he a potential murderer but he's also an arrogant hothead, constantly flying off the handle  at whoever he's interacting with at the moment and accusing them of thinking he's insane (which he certainly appears to be). This film could just as easily been called STOP ME BEFORE I ACT LIKE A JERK!  Also it doesn't help that the plot  revolves around him being an abusive husband (intentionally or not). After all, he doesn't want to kill anyone else, just Denise.

Still, the film does have its pleasures, chief among them the performance of Claude Dauphin as Dr. Prade. It's not to guess that his motives in the film might not be entirely altruistic but he still exudes a trustworthy, paternal quality that makes it a pleasure whenever he's onscreen. I also found the film depiction of psychiatry to be interesting. I was very amused when Prade lists lobotomy as a treatment option in his first session with Colby. Also very intense was the scene where Prade forces Colby to breath carbon dioxide in order to literally choke repressed memories out of him.

Val Guest contributed several classics to the Hammer Films canon both as a writer and director, including QUATERMASS 2 and THE DAY THE EARTH CAUGHT FIRE. STOP ME BEFORE I KILL! may be minor Guest but it's still interesting enough to be recommended. It's dated somewhat and its twists aren't terribly difficult to see coming but it's still able to entertain as an example of a competently made B movie of the period. Just keep away from the carbon dioxide.