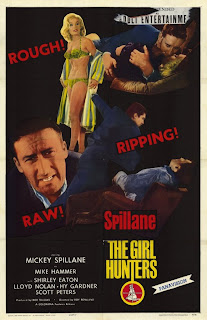 When Mickey Spillane's first Mike Hammer novel, I, THE JURY, was released in 1947 it became an instant success, selling over six million copies. Spillane's novels continued to resonate with the public, eventually selling over 200 million copies worldwide. It was inevitable that Mike Hammer would make the jump to motion pictures, which he did in 1953 with I, THE JURY starring Biff Elliot as Hammer. After three films starring three different actors playing Hammer (Elliot, Ralph Meeker and Robert Bray) and a television series starring Darren McGavin, director Roy Rowland decided to go right to the source for his newest Hammer film, THE GIRL HUNTERS: who better to play the iconic detective than Spillane himself? 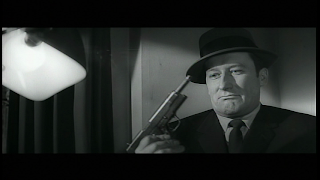 THE GIRL HUNTERS, based on Spillane's 1962 novel and written by Spillane, Rowland and Robert Fellows, doesn't waste any time with character introductions, assuming (probably rightly) that any audience for the film would already know all they need to about the main players. The film begins with Hammer literally hammered, having gone on an apparently years-long bender brought on by the disappearance and probable murder of the love of his life, his secretary Velda. When Hammer hears a deathbed confession by a murder victim that hints that Velda may still be alive, Hammer sobers up with the intention of rescuing Velda and dispensing justice on anyone who harmed her. Hammer follows a trail of bodies to the beautiful widow of a anti-Communist crusading senator (Shirley Eaton, who of course is unable to resist Hammer's charms) and an elusive band of Communist agents with plans to take over the world. Hammer soon finds himself the target of master assassin The Dragon, who he must defeat in order to save Velda and make the world safe from those dirty commies once and for all. 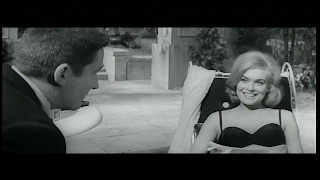 The plot is pretty ridiculous, engaging in equal parts sex, violence and red baiting, but that turns out to be the film's biggest strength. The loonier the story gets the more it diverts attention from the problem at the center of the film: the gimmick casting of Mickey Spillane as Mike Hammer.  Spillane gets the tough guy attitude down but he's just not a professional actor and it shows. Many of his line readings are flat (especially the voice overs) and he's quite deficient in the screen presence department. It's pretty funny to see this overweight, heavy drinking (Hammer is referred to several times as being a recovered alcoholic but he always seems to have a beer in his hand) middle aged man be irresistible to women, especially Eaton, who is several times out of his league. Luckily, the film surrounds Spillane with some real pros, most notably Lloyd Nolan as an FBI agent who pretty much just sits around and drinks while waiting for Hammer to crack the case. And before you get your hopes up, the long awaited reunion with Velda never comes. The film seems to forget all about her in favor of an exciting, violent (at least for 1963) climax. Maybe in the next film. 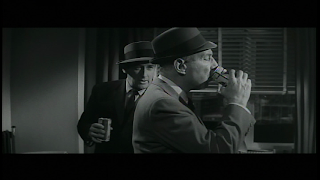 There were plans to film Spillane's next Hammer novel, THE SNAKE, again with Spillane as Hammer but perhaps wisely those plans fell through. THE GIRL HUNTERS would prove to be the last on-screen Mike Hammer adventure until 1981 when Kevin Dobson played him in the TV movie MARGIN FOR MURDER. There would be one more big screen Hammer feature, 1982's I, THE JURY starring Armand Assante, before Hammer returned to television played by Stacey Keach beginning in 1984. Today THE GIRL HUNTERS is thought of, if at all, as a curiosity.  It deserves a slightly better reputation than that. It's a fun, oddball little movie and the casting of Spillane gives it some novelty. Incidentally, this wasn't Spillane's first movie appearance. In 1954 he starred as himself alongside circus owner Clyde Beatty in the bigtop mystery RING OF FEAR, also for producer Robert Fellows. I haven't caught up with that one yet but I plan to soon.