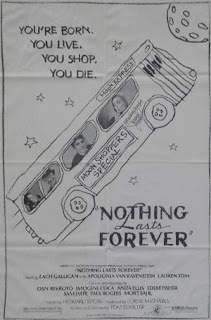 Tom Schiller was part of the original writing team for SATURDAY NIGHT LIVE and stayed with the show for eleven years. During that time as part of his occasional "Schiller's Reel" segment he was given free reign to write and direct short films starring the SNL cast which became famous in their own right, most notably "Don't Look Back in Anger," featuring an elderly John Belushi dancing on the graves of his castmates (ironically made just four years before Belushi became the first SNL cast member to die). In 1984 Schiller was given the opportunity to make the leap to features with NOTHING LASTS FOREVER, a bizarre mix of comedy and fantasy which also serves as an homage to the type of classic Hollywood films that Schiller often paid tribute to in his SNL shorts. 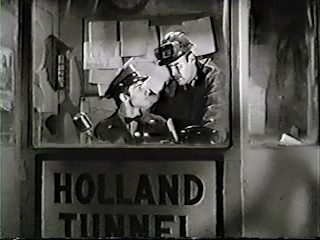 NOTHING LASTS FOREVER takes place in an alternate reality New York City designed to evoke the 1930s (although it's set in the present day) where, after a crippling transportation strike, the Port Authority has taken control of the city, installing a totalitarian government complete with strict immigration laws and P.A. announcements signaling the beginning and end of each work day. Into this insanity comes Adam Beckett (a pre-GREMLINS Zach Galligan), a wanna-be artist who after failing a Port Authority issued art aptitude test is given a dead end job as a sentry at the Holland Tunnel. Because of his acts of kindness towards the city's street people, Adam is adopted by an Illuminati-like cabal of homeless folk who live under the city. The leader of the group (played by veteran character actor Sam Jaffe in his last role) explains that they control every aspect of people's lives everywhere except one place - the moon, which has been turned into a shopping destination for senior citizens under the control of the U.S. government. So Adam boards the next bus to the moon (complete with complementary Lunartinis and on-board entertainment by Eddie Fisher) in order to free the people of the moon, find his purpose in life and meet Eloy, the moon girl of his dreams (Lauren Tom). 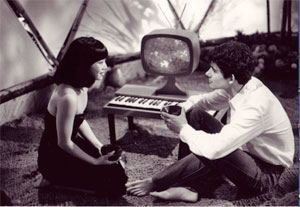 NOTHING LASTS FOREVER is every bit as quirky as it sounds and while quirky can also mean irritating in this case it means inventive. The film is so imaginative from the very beginning that by the time Adam boards a bus to a moon populated by hula dancing moon ladies it really doesn't seem like that much of a leap. I get the feeling that Schiller must have thought he wouldn't get the chance to make a second feature (at least with as much creative freedom) so he'd better cram all of his ideas into this one. It also helps that the film is cast with lots of well known actors (Dan Aykroyd, Bill Murray, Imogene Coca, Mort Sahl) that help to make the surroundings less strange. The film is shot is beautiful black and white (which turns to color during the Illuminati and moon sequences) and Schiller makes the most of a meager budget by incorporating stock footage from silent and early talkie films in place of building expensive sets. It's all topped of by a wonderful Howard Shore score that evokes B films of the 1930s. 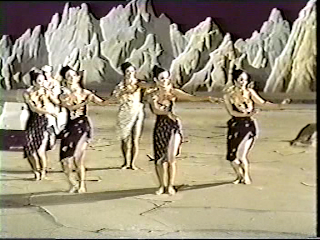 As can probably be expected for a film of this nature, it's had its share of distribution troubles. The film went unreleased by its distributor, MGM, perhaps not surprising given their financial problems at the time and the utterly noncommercial nature of the film. However, it has also never had a release on any home video format due to elusive "legal issues." It's surfaced occasionally over the years at special screenings and it had at least on European TV broadcast.  Bill Murray in particular has been a vocal cheerleader for the film and has shown up to help publicize screenings of it whenever possible. Hopefully the film will eventually be able to clear its legal hurdles so it can find a wider audience. It's a fun, lively little film and one that could never get financing from a major studio today. It's a shame that the only convenient way to see this film is via a cruddy bootleg and it would be wonderful if a quality, legal version were to finally be made available.